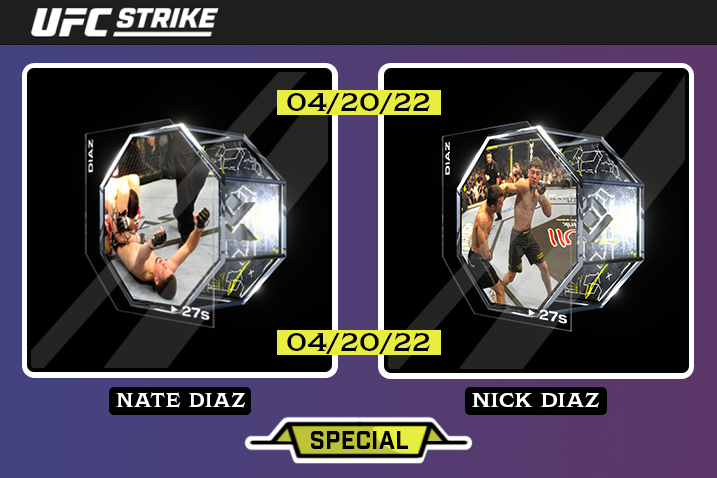 To celebrate 4/20, the biggest day of the year for all pot smokers, UFC Strike dropped an NFT collection of the most notorious weed heads in its franchise, Nick and Nate Diaz. With both fighters cultivating a mass cult following throughout their illustrious MMA careers, the launch of the 2,500 asset collection was met with much anticipation, leading to its sell out in just a matter of hours.

'The 209' NFT packs (the name is a nod to the brothers' heavily-repped Stockton California area code) were each priced at $40 (and limited to one per customer). Inside each pack was either a Nick or Nate Diaz ‘Limited Edition’ Moment NFT, along with two Series 1 ‘Contender’ Moments.

Nick’s ‘Limited Edition’ moment was his brutal KO against Robbie Lawler at UFC 47, while Nate’s moment was his ruthless submission of Kurt Pellegrino at UFC Fight Night 13. Each aptly had a total mint count of 1,420.

Despite the evident popularity amongst fans, the brothers aren’t particularly pleased with their involuntary involvement in the launch (which most certainly stems from their long-running feud with the UFC). Nate, who is perhaps the more vocal of the two when it comes to his dislike of his employers, took to Twitter to outline the hypocrisy of the launch:

“It’s sht like this why I need to get the fck out of the sorry ass UFC. Didn’t you guys suspend nick for 5 years and fine me hella money for a vape pen?! Now you’re reaping the benefits. I hope nobody buys this bullsh*t”.

On reflection, it does seem rather strange that the UFC happily launched an NFT with a premise that it explicitly condemned and disciplined only a few years ago, and it is unclear what cut (if any) the brothers will get from its revenue.